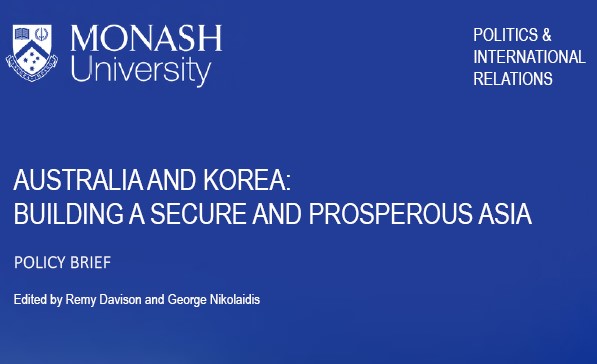 This policy brief draws upon research conducted for the project ‘Australia and Korea: Building a Secure and Prosperous Asia,’ funded by the Australian Department of Foreign Affairs and Trade (DFAT), Australia-Korea Foundation (AKF) programme, and co-funded by Monash University. This project proudly partners with the Korea Institute for International Economic Policy (KIEP) and the Australia-Korea Business Council (AKBC).

The papers in this publication identify critical issues in Australia and Korea’s current and future relationship. It examines the negotiation of key agreements and bilateral policy cooperation in the Indo-Pacific region. This policy brief delivers diverse perspectives from business, government and academic analysts and practitioners, debating key economic, political and security issues between Australia and Korea, including critical minerals, hydrogen exports, education services, cultural industries, international trade, defence procurement, and how these sectoral issues can be further integrated and expanded to build upon the increasingly complex interdependent relationship between Australia and the Republic of Korea.

In December 2021, Australia-Korea relations entered a new dynamic phase with the signing of the Comprehensive Strategic Partnership (CSP) in Canberra by the Prime Minister of Australia and the President of the Republic of Korea. The CSP covers the bilateral partnership, defence and security cooperation, the Korean Peninsula, and regional and global cooperation. Both the Australian and Korean leaders acknowledged the Australia-Korea Foundation’s (AKF) critical role in promoting bilateral partnerships and other collaborations in business, education, academia, arts, culture, and society.

This project’s aim was to identify existing and potential areas for consolidating, extending and advancing the Australia-Korea partnership. This Policy Brief will be useful to private and public sector professionals, media, civil society actors, Australian and Korean officials, and all policy practitioners who work in issue areas such as trade, defence, resources, security, education and finance in the Indo-Pacific and beyond. It will be of particular interest to specialists in Australian and Korean commerce, and foreign, security and defence policy.