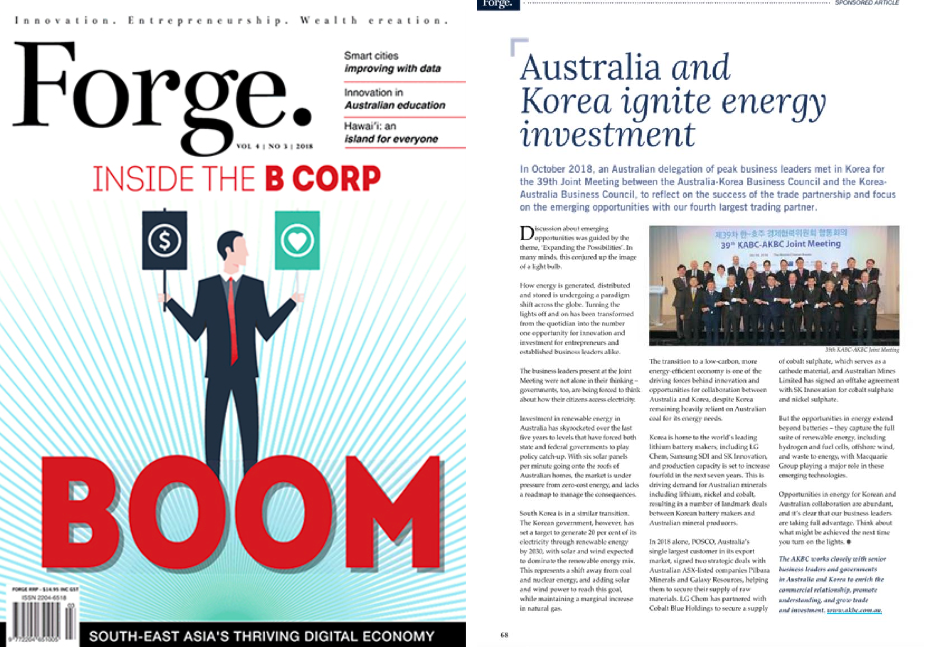 In October 2018, an Australian delegation of peak business leaders met in Korea for the 39th Joint Meeting between the Australia-Korea Business Council and Korea-Australia Business Council to reflect on the success of the trade partnership and focus on the emerging opportunities with our fourth largest trading partner.

Discussion about emerging opportunities was guided by the theme, ‘Expanding the Possibilities’. In many minds, this conjured up the image of a light bulb.

How energy is generated, distributed and stored is undergoing a paradigm shift across the globe. Turning the lights off and on has been transformed from the quotidian into the number one opportunity for innovation and investment for entrepreneurs and established business leaders alike.

The business leaders present at the Joint Meeting were not alone in their thinking – governments too are being forced to think about how their citizens access electricity.

Investment in renewable energy in Australia has sky rocketed over the last five years to levels that have forced both state and federal governments to play policy catch-up. With 6 solar panels a minute going onto the roofs of Australian homes, the market is under pressure from zero cost energy and lacks a roadmap to manage the consequences.

South Korea is in a similar transition. The Korean government, however, has set a target to generate 20% of its electric generation through renewable energy by 2030, with solar and wind expecting to dominate the renewable energy mix. This represents a shift away from coal and nuclear energy and adding solar and wind power to reach this goal, while maintaining a marginal increase in natural gas.

The transition to a low-carbon, more energy efficient economy is one of the driving forces behind innovation and opportunities for collaboration between Australia and Korea, despite Korea remaining heavily reliant on Australian coal for its energy needs.

Korea is home to the world’s leading lithium battery makers, including LG Chem, Samsung SDI and SK Innovation, and production capacity is set to increase fourfold in the next seven years. This is driving demand for Australian minerals including lithium, nickel and cobalt, resulting in a number of landmark details between Korean battery markers and Australian mineral producers.

But the opportunities in energy extend beyond batteries – it captures the full suite of renewable energy including hydrogen and fuel cells, offshore wind, and waste to energy with Macquarie Group playing a major role in these emerging technologies.

Opportunities in energy for Korean and Australian collaboration are abundant and its clear our business leaders are taking full advantage. Think about what might be achieved the next time you turn on the lights.

The AKBC works closely with senior business leaders and governments in Australia and Korea, to enrich the commercial relationship, promote understanding, and grow trade and investment.

This article appeared in Volume 4, No 3 2018 Edition of FORGE Magazine