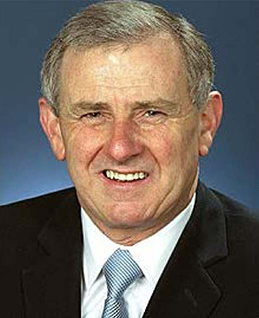 Simon Crean has been a leading figure in Government, politics and industrial relations for five decades.

A graduate in economics and law from Monash University he began his career as a research officer and advocate before becoming General Secretary of the then Storemen and Packers Union (now the NUW) in 1979. He also served as Vice President of the ACTU and in 1985 became its President. He played a key role in the development and implementation of the Accord under the Hawke Government.

Mr Crean was elected to Federal Parliament as Member for Hotham in 1990, successfully contesting the seat eight times over 23 years, on the front bench in all of them and going immediately into the Ministry as Minister for Science and Technology and Minister assisting the Treasurer (1990-91). In the former role he established the Co-operative Research Centre program (CRC’s)

He served in the Cabinets of four Prime Ministers (Hawke, Keating, Rudd and Gillard) over 12 years.

He held the portfolios of Primary Industries and Energy (1991-1993), developing the first national drought and natural disasters policy.

He was Minister for Employment, Education and Training (1993-1996) where he implemented the Working Nation program.

In Opposition he was Leader (2001-2003) and held the Shadow Ministries of Treasury, Industry Trade and Regional Development. He was also Leader of the House.

With the Labor election in 2007 he returned to Cabinet as Minister for Trade (2007-2010), where he was heavily involved in the DOHA Round

in the WTO and in the successful ANZFTA, and Chile FTA’s. he was also involved in commencing the FTA’s with China, Korea, Japan and Indonesia and the TPP.

He was Minister for Employment, Workplace Relations and Social Inclusion (2010) and Minister for Regional Australia, Regional Development and Local Government (2010-2013) developing an inclusive partnership model for regional development.

He was also Minister for the Arts in this period developing the Creative Australia policy.

Mr Crean retired from Parliament in 2013.

He is Chair of ALEC, Co-Chair Cornerstone Group Advisory Board, Deputy Chair EABC, Director of Linfox International Group, LiveCorp and RMAC. He is a member of the Monash University Council and Chairs the Deakin University Advanced Manufacturing Group, where he is an Associate Professor.

He was awarded an Honorary Doctor of Laws from Deakin University in 2014.