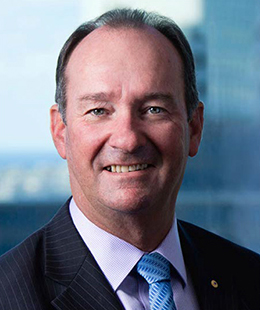 The Hon. Mark Vaile is not only a global leader as the former Australian Deputy Prime Minister (’05-’07), but also an accomplished and renowned diplomat. Through Mark’s passion for rural Australia he started his career as a Jackeroo in the early ’70’s, before returning to his hometown in mid North Coast NSW.

Mark’s service to Australia began in Local Government as a member of the Greater Taree City Council, including three years as Deputy Mayor. With a winning combination of strategic focus, finely tuned negotiation skills, and an acute sense of integrity rarely witnessed in the political arena, Mark soon became a member elect for the Federal seat of Lyne, located on the mid North Coast of New South Wales, until 2008.

Mark’s impressive political career whilst in government has seen him hold several ministerial positions; Transport and Regional Development, Agriculture, Fisheries and Forestry, Trade, and he was the unopposed leader elect of Australia’s National Party (’05 -’07) and ultimately the Deputy PM of Australia.

Mark’s expansion of global markets for Australia and its trade partners, combined with his exceptional leadership, and deep respect from both his peers and his constituents, all contributed to him attaining the role of Deputy Prime Minister of Australia.

Mark retired from political life in July ’08 to pursue a career in the private sector.

Mark currently serves as Chairman of the Board for:

He is also a Director on the Boards of: