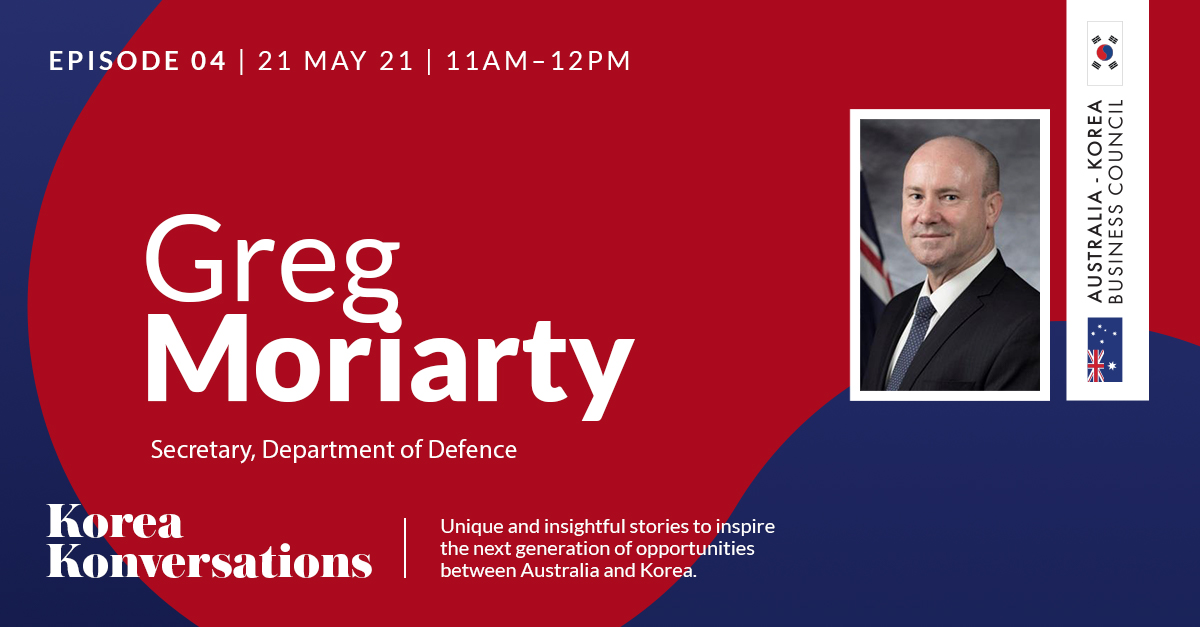 Korea Konversations is a new initiative that celebrates the 60 years of diplomatic relations between Australia and Korea by inviting a mix of Australian and Korean high profile senior executives who have contributed greatly to the relationship or represent sectors of importance to the future of the Australia-Korea relationship to speak to our members.

For the fourth series, we are delighted to speak to Greg Moriarty, Secretary, Department of Defence.

Mr Moriarty commenced as Secretary of the Department of Defence on 4 September 2017.

Mr Moriarty first worked in Defence from 1986 to 1995, primarily in the Defence Intelligence Organisation. He also served in the Headquarters of the United States Central Command in the Persian Gulf during Operations Desert Shield and Desert Storm.

Prior to his appointment as the Secretary of Defence, Mr Moriarty held senior roles in the Prime Minister’s office, first as the International and National Security Adviser and then as Chief of Staff to Prime Minister Malcolm Turnbull.

In June 2015 Mr Moriarty was appointed Commonwealth Counter-Terrorism Coordinator in the Department of the Prime Minister and Cabinet. Mr Moriarty was responsible for coordinating and implementing Australia’s counter-terrorism arrangements, in close partnership with the States and Territories.

Mr Moriarty has extensive experience within the Department of Foreign Affairs and Trade (DFAT). Mr Moriarty served in a number of senior roles, including as Deputy Secretary (2015), Ambassador to Indonesia (2010-2014), First Assistant Secretary, Consular Public Diplomacy and Parliamentary Affairs Division (2009-2010), Assistant Secretary, Parliamentary and Media Branch (2008-2009), Ambassador to Iran (2005-2008), Assistant Secretary, Maritime South East Asia Branch (2002-2005), and as the Senior Negotiator with the Peace Monitoring Group on Bougainville.
Mr Moriarty holds a Bachelor of Arts Degree with Honours from the University of Western Australia and a Masters Degree in Strategic and Defence Studies from the Australian National University. He is married with two children. Mr Moriarty has studied Indonesian and Tok Pisin.