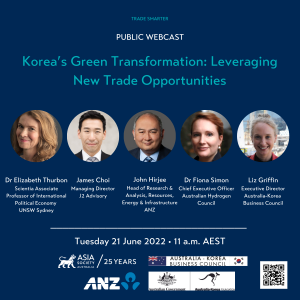 How will Korea’s clean energy agenda open opportunities for trade and collaboration with Australia? In what ways can we learn from each other’s example?

In 2021, President Moon Jae-In announced an ambitious climate and energy agenda which he dubbed as Korea’s ‘Green New Deal’. Involving a US$144 billion investment, Moon outlined a whole of government approach to achieving net-zero by 2050. And despite a recent change in government, Korea has undoubtedly chosen to embark on a substantial transformation of its economy which has been historically dominated by coal and ‘brown energies’.

The Australian Government has also pledged to achieve Net-Zero by 2050 and has a lot to gain from collaborating with Korea, whose green policies have been driven not only by government planning but by extensive public-private cooperation, using market forces to fast-track its goals.

In-person attendees will have the opportunity to network and join a light lunch following the address.