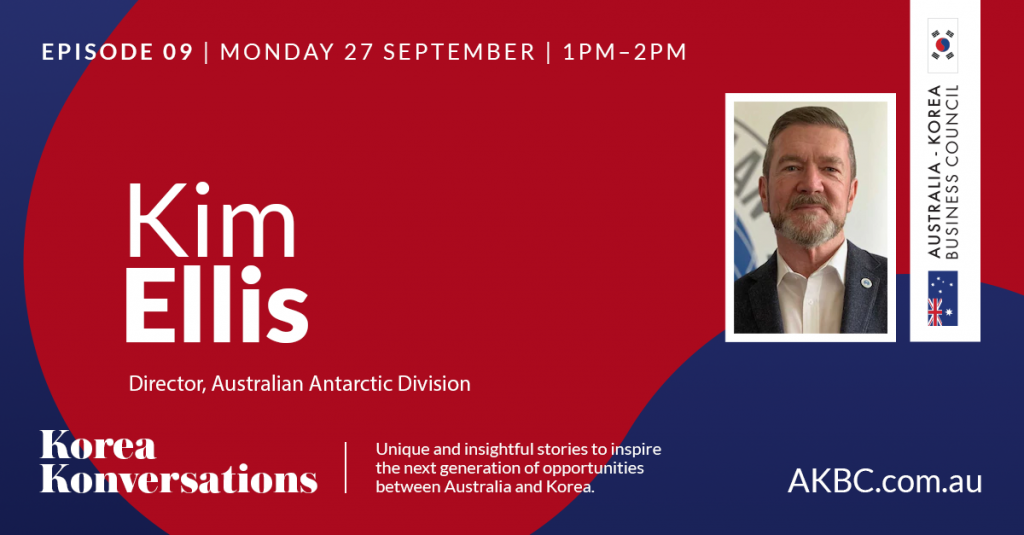 Korea Konversations is a new initiative in 2021, which celebrates the 60 years of diplomatic relations between Australia and Korea by inviting a mix of Australian and Korean high profile senior executives who have contributed greatly to the relationship or represent sectors of importance to the future of the Australia-Korea relationship, to speak to our members.

Episode 8 with Kim Ellis will provide a unique opportunity to learn more about Australia’s agency responsible for undertaking science programs and research projects to contribute to an understanding of Antarctica and the Southern Ocean. Australia is one of the most significant players on Antarctica and the Australian Antarctic Division considers 42 per cent of the continent Australian territory. Australia has recently commissioned a new Antarctic icebreaker, the RSV Nuyina which has now begun its journey home to Tasmania and is due to arrive in late October. The RSV Nuyina demonstrates Australia’s commitment to Antarctic science and research.

Australia and Korea have three forums in which they regularly meet, including the Antarctic Treaty Consultative Parties, the Committee for Environmental Protection, and the Commission for the Conservation of Antarctic Marine Living Resources. Collaboration between Australia and Korea are in its nascent stages however with shared values and common security interests, this Konversation will explore what more Australia and Korea could be doing together.