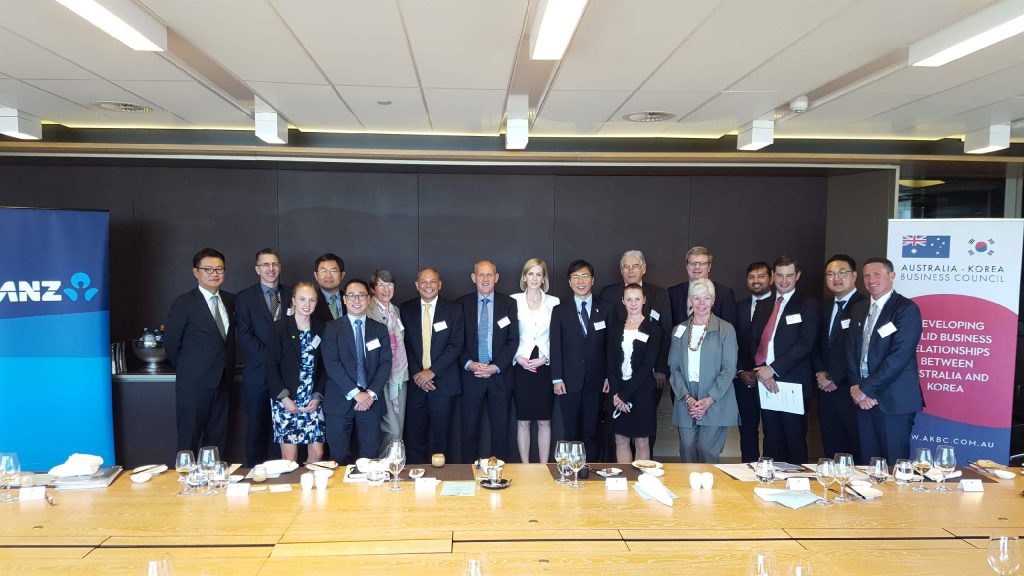 On Monday 5 February, AKBC members and guests joined Governor An Hee-jung for a roundtable to discuss the importance of Australia and Korea’s trade and investment relationship.

Governor An is an influential figure in Korean politics. He is consistently rated as the most popular governor in the ROK in public polling and is seen by commentators as a leading contender for President at the 2022 elections (though he has not announced an intention to run). He was runner-up to President Moon Jae-in in the Minjoo Party nominations for presidential candidate in 2017, despite being younger and less well-known than other candidates. Governor An has announced that he will not stand for re-election as governor when his current terms ends in June 2018.

AKBC members enjoyed a rich discussion with Governor An on topics including youth unemployment, women in leadership, chaebol structure, innovation and regional growth.

Against the backdrop of the winter games, Governor An also shared his thoughts on how to become a global citizen in the 21st century.

A special thanks to ANZ for hosting the roundtable at their offices in Sydney.

Background note on the Australia-Korea relationship:

Australia’s bilateral relations with the ROK are warm and positive.  Prime Minister Turnbull and President Moon have met regularly, most recently at the East Asian Summit.  Ms Bishop and Senator Payne visited the ROK in October 2017 for the 2+2 Foreign and Defence Ministers’ Meeting.

The ROK is Australia’s fourth-largest trading partner and third-largest export market.  The world‑class and comprehensive Korea-Australia Free Trade Agreement (KAFTA) has helped grow our annual bilateral trade to A$39 billion in 2016-17.  KAFTA supports one of the strongest and most complementary economic relationships in the Asia-Pacific region and is delivering outcomes for Australia.  KAFTA protects and enhances the competitive position of Australia’s businesses in ROK by providing Australian businesses the best treatment the ROK has agreed with any trade partner.  KAFTA has delivered five rounds of tariff cuts since it entered into force in December 2014, and the next round of tariff cuts will occur on 1 January 2019.

As well as coal, iron ore and aluminium, the ROK is an important market for Australian beef, sugar and medicaments, while Australia’s key imports from the ROK include petroleum, automobiles and consumer electronics.

There is scope to continue to strengthen our bilateral trade through expanding services trade and investment flows.  Services trade comprises 8.5 per cent ($3.3 billion, 2016-17) of total bilateral trade.  The ROK is our 15th largest foreign investor. It has grown from a low base in 2006 ($5.0 billion) to $23.6 billion at the end of 2016.

Bilateral people-to-people links are deep and continue to grow.  Australia welcomed nearly 300,000 tourists from the ROK in 2017.  It is also Australia’s sixth-largest market for education, with more than 30,000 enrolments across all education sectors in Australia in 2017.  The numbers of New Colombo Plan scholars studying in the ROK continue to increase, with 460 mobility grants awarded in 2018 (up from 258 awarded in 2017).  We have a vibrant and active Korean community in Australia, with almost 100,000 Australian residents claiming Korean ancestry in the 2016 Census.

The ROK economy is performing strongly.  It defied expectations by growing 3.1 per cent in 2017.  Favourable export conditions and jobs growth has led to 3 per cent GDP growth forecasted for 2018.  Unemployment is steady at 3.5 per cent.