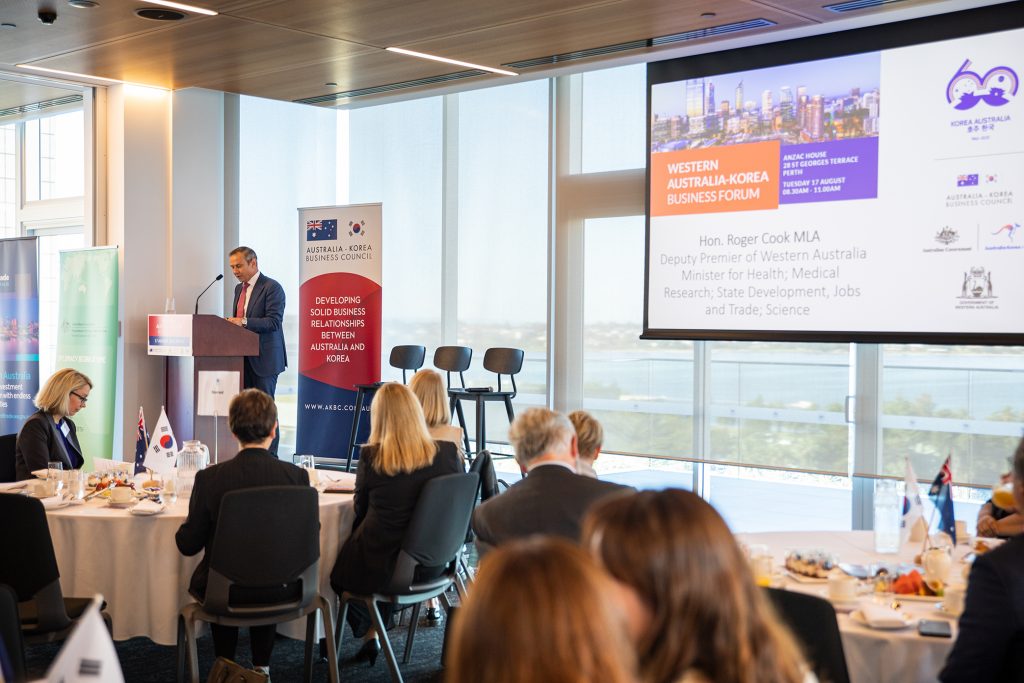 The AKBC and Australia-Korea Foundation were honoured to hear from a number of distinguished guests in the bilateral relationship, who engaged in a fascinating discussion on the opportunities, challenges and priorities for our business communities and governments.

Korean Ambassador to Australia, H.E. Mr Jeong-Sik Kang, and Deputy Premier of Western Australia, Hon Roger Cook MLA began proceedings with remarks highlighting the complementary nature of our two economies and the specific ways in which the Western Australian Government is engaging with Korean businesses.

WA State Director of the Department of Foreign Affairs and Trade, Sarah Hooper, moderated a panel of government, business and industry leaders, including the Chair of the Australia-Korea Business Council, Hon Simon Crean, who foregrounded the need for greater coordination of common infrastructure as both governments look to develop more cohesive approaches around critical minerals and hydrogen.

Ken Brinsden, CEO of Pilbara Minerals, outlined the promising future of battery minerals in Western Australia, labelling Korea as the “next big mover” in this market as companies like Pilbara Minerals develop and mature partnerships with Korean first movers, including POSCO.

Daniel Kwon, representing POSCO’s Perth Office, similarly spoke to this opportunity, drawing attention to the company’s $5 billion investment in Australia to date, as it looks to become a leader in the hydrogen market and develop new partnerships and joint ventures with Australian companies.

Naomi Mathers, Board Member of the Australia-Korea Foundation, focused her remarks on the funding opportunities available to Australian and Korean companies through its grants program, which aims to increase public awareness of Australia in Korea, and of Korea in Australia, and the significance of relationship building to achieving positive bilateral outcomes.

To bring an end to the event, the Australian Ambassador to Korea, Cathy Raper, examined how the Australian and Korean governments are actively exploring practical project-based areas for cooperation, which could include green hydrogen, low emissions iron ore and steel, electric vehicles, hydrogen storage technology, and critical minerals.

The AKBC would like to thank the Australia-Korea Foundation and Western Australian Government for its support of the event as well as AKBC Treasurer Clare Pope for being the MC.